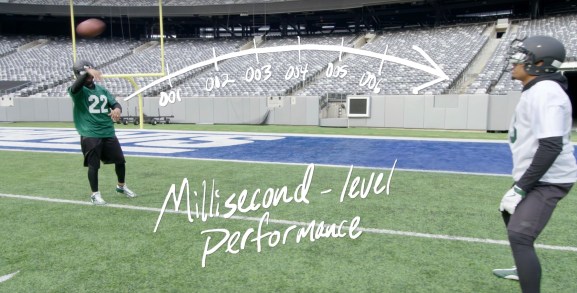 As the 2018 Mobile World Congress wound down this week, next-generation 5G wireless technology was clearly the show’s biggest story, promising dramatically faster data speeds. But 5G’s secret weapon will actually be ultra-low latency, a concept that’s easily understood, but hard to market. Verizon, Vodafone, and Huawei have spent the last month demonstrating how low latency will radically improve wireless video, video games, and VR, focusing on just a few of the industries 5G will transform over the next few years.

Latency means responsiveness — think of it as the time gap between a request and a response. When you finish entering a URL into your phone’s web browser, the page takes seconds to display because of two factors: the time it takes for the request to be acknowledged (latency), then the time it takes to send all of the page’s text, images, and video to your phone (data rate).

5G dramatically improves both latency and data rates. It can cut response time down to 1-2 milliseconds (0.001 or 0.002 seconds) from 4G’s average 50 milliseconds (0.05 seconds). Similarly, it can increase the data rate from 4G’s average 0.02-0.03 Gigabits per second to between 0.1-5.0 Gigabits per second. That means you could expect to see the typical webpage load completely in one second, versus a several-second or longer delay.

But forget about web pages. The biggest beneficiaries of 5G’s ultra-low latency are expected to be games, VR, factories, medicine, autonomous cars, and traffic systems.

Huawei announced today that tests of the most recent 4G/LTE gaming advancement, Short TTI, achieved a 33-millisecond end-to-end latency — superior to the 50 millisecond latency that’s considered the bare minimum for enjoying non-VR games. For competitive online gamers, the over 30% reduction in latency over 4G is a nice improvement, but it’s not even close to what 5G will soon be offering.

In the VR world, it’s understood that headset users will experience nausea when latency is over 20 milliseconds; ideally, VR latency would be no more than seven milliseconds, if not zero. (Vodafone and Ericsson offered a demo this week showing how even 15-millisecond VR gaming can be jarring if interrupted by 0.1-second network lag spikes.) Consequently, streaming VR content is currently a non-starter with today’s 4G cellular connections. But with 5G’s sub-5 or sub-2 millisecond latency, you could literally be turning your head in realtime as cameras in a far-off place send live 3-D video to your fully wireless headset. 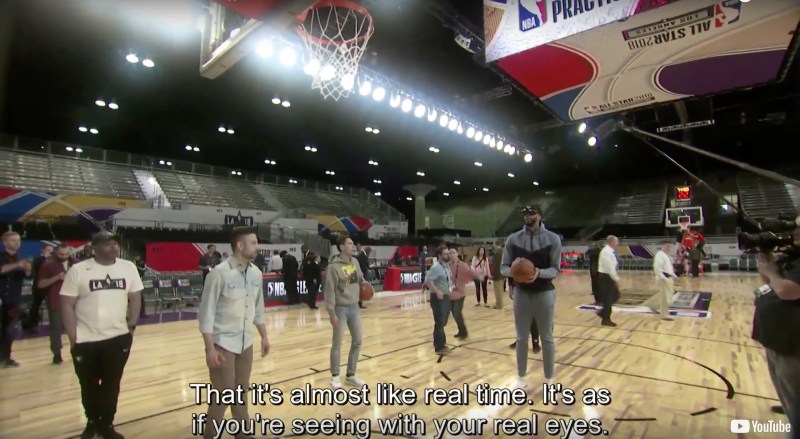 Above: NBA players Bradley Beal and Anthony Davis were equipped with 5G camera-equipped VR headsets to demonstrate the low-latency of live 5G virtual video during practice for the 2018 NBA All-Star Game in February, 2018.

Verizon recently demonstrated this by placing NFL and NBA players in camera-equipped, wireless VR headsets and having them practice in the real world using only 5G-streamed video for vision. Even when the video was streamed back and forth over a 5G network, it was “live” enough — thanks to low latency — for professionals to play two sports, not just watch. 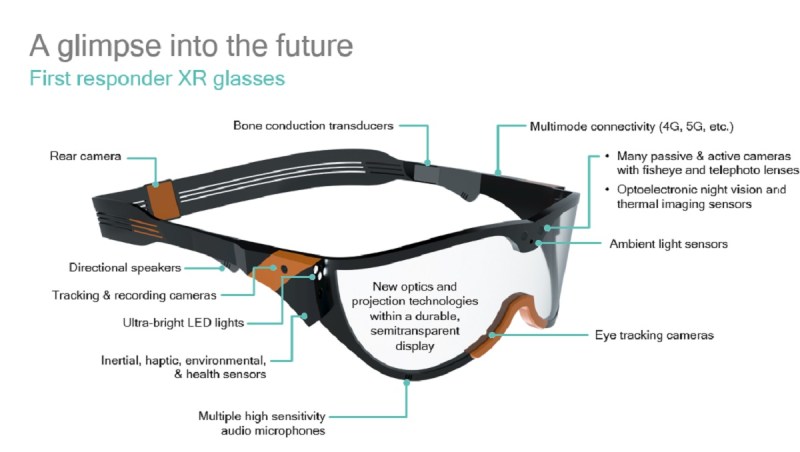 Above: Qualcomm’s vision for the “extended reality” glasses of the future.

Imagine 5G video games completely generated by a super-powerful server and live-streamed to your headset — that’s what’s coming next. After that, headsets could evolve into “extended reality” (XR) glasses that alternate between VR and augmented reality as needed. Qualcomm has been working on so-called XR concepts for some time, and working with VR headset makers on next-generation fully wireless VR solutions for near-term release.

Factories will be another key beneficiary of 5G’s low latency. Qualcomm recently demonstrated how 5G will enable multiple industrial machines to be independently remote-controlled with only 1-2ms latency, using sets of four spinning platters to demonstrate. Each platter had a small hole at the top that either revealed or obscured a red LED light located at the 12:00 position. With 5G, all four fast-spinning platters could be coordinated to reveal the red light at the same split-second instant, indicating latency comparable to a wired Ethernet connection. 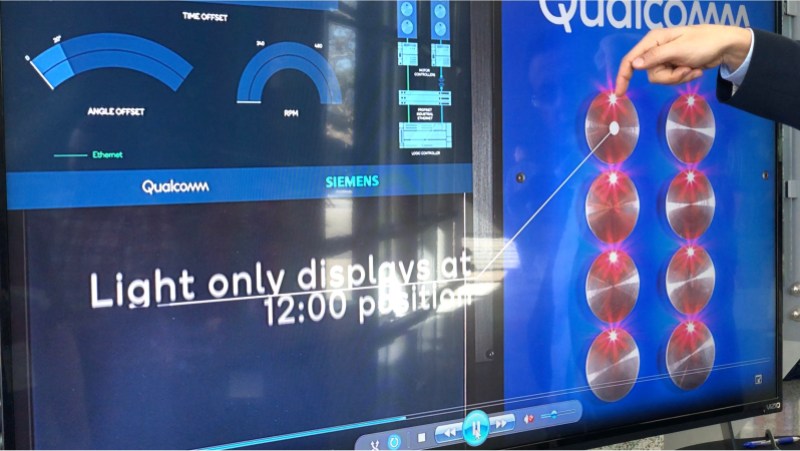 In the real world, factories won’t be using spinning platters, but their robotic machines will depend on low-latency wireless to process precise manufacturing and testing commands. The exact same technology will have medical implications, as well: Picture the world’s best heart surgeon perfectly controlling robotic arms during a life-saving operation on the other side of the world. The impact on remote medicine will be astounding.

Will our society really trust machines to reliably provide services to people under remote wireless guidance? As hard as it might be to imagine now, the answer is yes. Keeping people safe in autonomous cars will literally depend on low latency — so much so that the 5G standard has been designed to include a special “ultra-reliable low-latency communications” (URLLC) protocol for vehicular use. 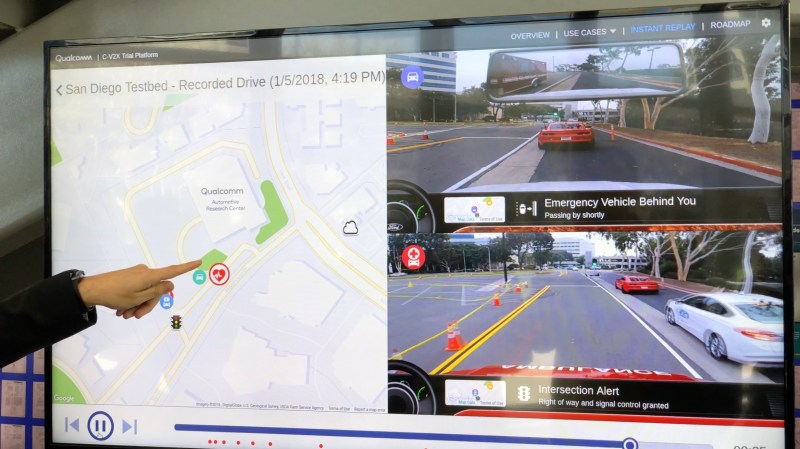 URLLC effectively tells the 5G wireless network that the data being sent demands 99.999% reliability, no interruptions, and millisecond-level responsiveness. That lets the network process data in short, accurate, and quick bits rather than huge and slower chunks — the difference between sending tiny remote steering wheel control commands or streaming a movie, which needs a lot of data but won’t kill anyone if the data arrives slower.

Combining AI and URLLC data over 5G will make it possible for millions of cars around the world to drive themselves, in cooperation with local 5G traffic systems. In the foreseeable future, your car will be able to share traffic data with other vehicles and the network, process changes faster than any person, and more quickly communicate with emergency vehicles if an accident occurs. Most technologists believe car accidents will begin to decrease in number as human drivers give way to coordinated computers.

The secret key to all of these game-changing advances is latency. So the next time you hear about 5G making it faster to download movies or browse the web, you’ll know that there’s a lot more to the 5G story than that, and that more responsive wireless devices will soon make a huge difference for all of us.