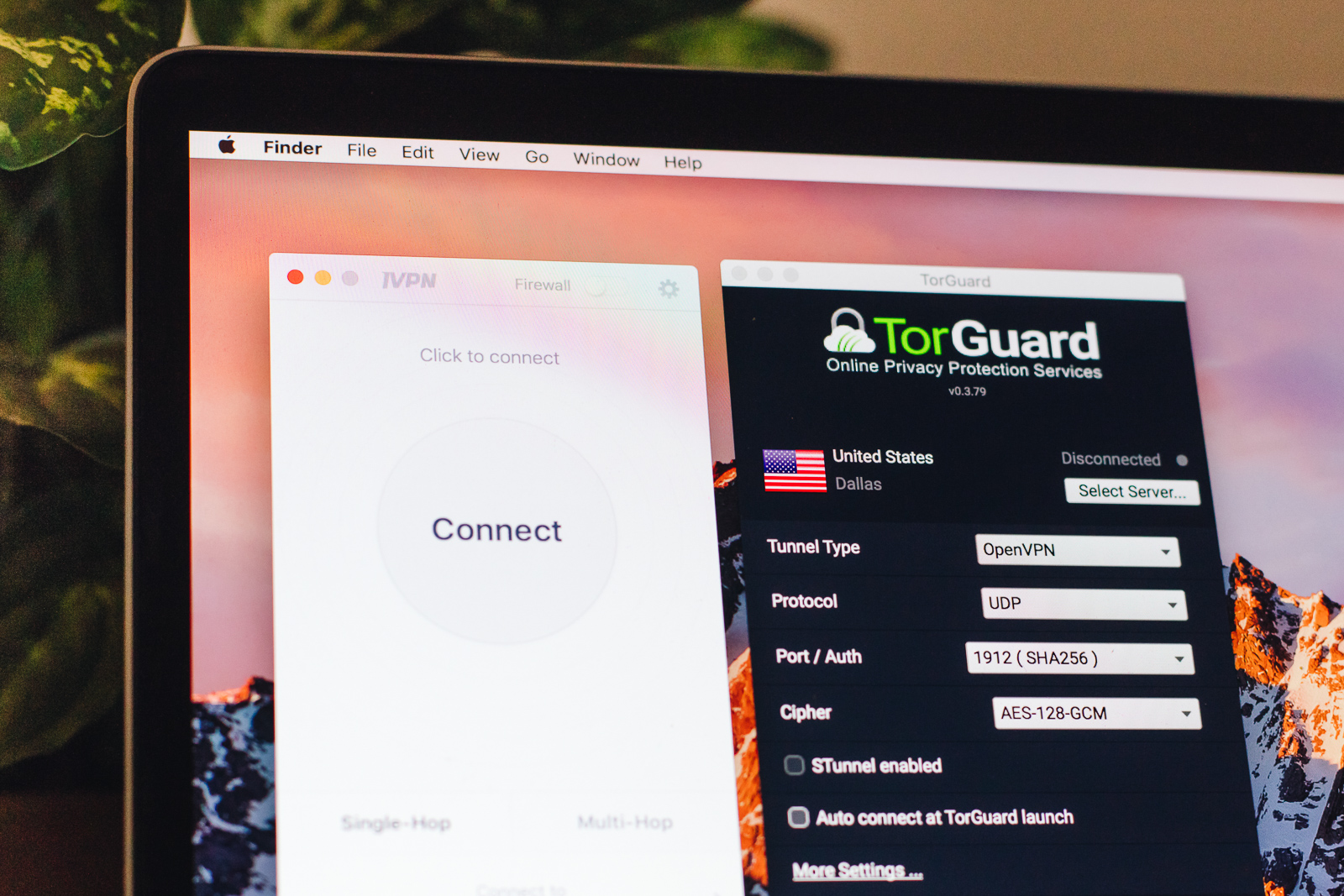 We spent more than 130 hours over four months researching 32 VPN services, testing 12, interviewing the leadership of five, and consulting information security and legal experts about our results. We found that most people should prioritize other security tools and privacy practices first, but in the cases where a VPN makes sense—such as when you’re connecting to public Wi-Fi—IVPN is the most trustworthy provider that offers fast, secure connections with an easy setup process on both computers and mobile devices.

What you should do before considering a VPN

Most people leave their privacy and security vulnerable in ways that are easier to fix with methods other than signing up for a VPN—methods that are potentially more effective. If you have a drafty house with paper-thin walls and halogen light bulbs, you’d get far more value out of every dollar by sealing cracks, insulating, and switching to LEDs than you would by putting solar panels on your roof. Similarly, before you rush to sign up for a VPN subscription, you should consider these other ways to up your privacy game.

Read more in our guide to security layers and good habits. We also like the Electronic Frontier Foundation’s guide to surveillance self-defense.

A VPN, or virtual private network, is not a magic bullet for online privacy, but it may be a useful tool in some circumstances. A VPN encrypts all the Internet traffic between your computer and the VPN server, preventing anyone on your local network, or connection points along the way, from monitoring or modifying your traffic. Beyond the VPN server (in other words, on the rest of the way to whatever Internet server you’re connecting to), your traffic mixes with traffic from other people on the VPN and the rest of the Internet. Ideally, that makes your traffic traceable only to the VPN server, not to your home, office, or computer. Though the extra steps and encryption layers slow down any Internet connection, the best VPN providers have connections that are speedy enough to keep browsing and online services snappy.

How we picked and tested

To narrow the hundreds of VPN providers to a manageable list, we first looked at reviews from dedicated sites like VPNMentor and TorrentFreak, research and recommendations from noncommercial sources such as That One Privacy Site and PrivacyTools.io, and user experiences and tips on various subreddits and technology-focused websites like Lifehacker and Ars Technica.

We settled on 32 VPNs that were repeatedly recommended. From there, we dug into the details of how each one handled issues from technology to subscriptions. Our initial research brought our list of serious contenders down to 12 VPN services. We signed up for each one and then dug deeper into their technology, performance, and policies.

We tested each service using both the Netflix-operated Fast.com download speed test and the more comprehensive Internet Health Test; the latter measures speeds up and down through multiple interconnection points between Internet providers.

To verify that each service effectively hid our true IP address, we looked at a geolocation tool, DNS leaks, and IPv6 leaks. When connected to each service’s UK servers, we noted if we could watch videos on BBC iPlayer, and using US servers we noted if we could stream Netflix. We also visited the sites of Target, Yelp, Cloudflare, and Akamai to check if our VPN IP addresses prevented us from accessing common sites that sometimes blacklist suspicious IP addresses.

We also dove deeper into the desktop apps of the top-performing services. Great apps have automatic location selection, easy-to-use designs, and detailed but uncluttered settings panels. We set up each service’s Android app on a Samsung Galaxy S8 running Android 7.0 Nougat. We took into account how easy each one was to set up and connect, along with what options were available in the settings pane.

We didn’t consider most VPN apps for iOS because OpenVPN connections aren’t possible on most native applications. Instead, for iOS we recommend downloading the free OpenVPN Connect app, which will let you connect via most VPN services. For more information, see How to use a VPN on iOS.

We contacted each of our finalists with simple questions about its service and troubleshooting. Most VPN companies provide technical support through online ticketing systems, meaning you’ll need to wait for a response. This means that self-help support sites are even more important, because waiting for a reply while your connection is down can be frustrating. Response times to our support inquiries ranged from 20 minutes to a day. 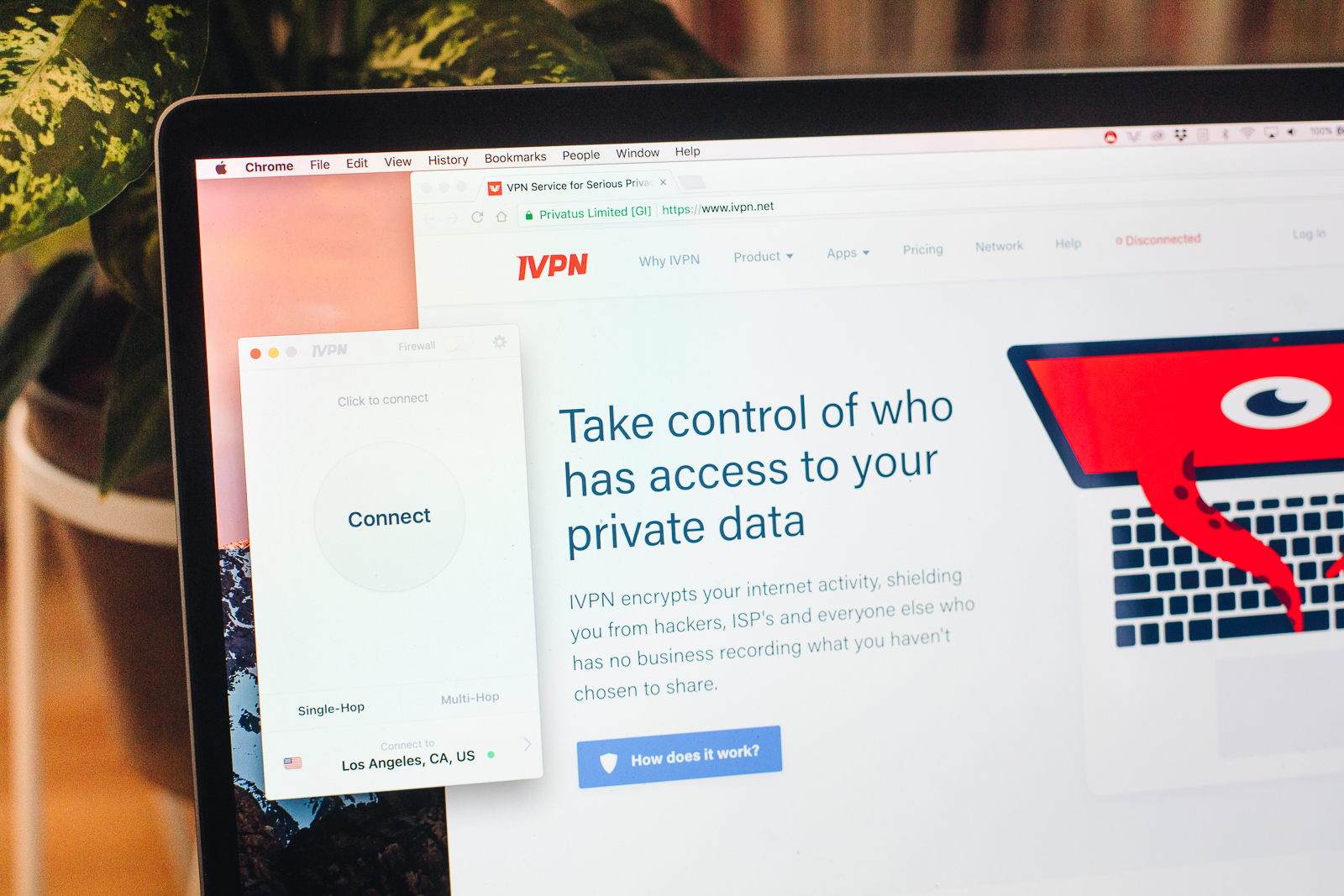 IVPN exceeded our requirements for being trustworthy and transparent. It also offers good performance without sacrificing security, and it’s easy to set up and use on nearly any device running Windows, macOS, Android, or iOS. Other VPNs we tested had faster connections at particular server locations or lower prices, but they came up short on essential factors such as transparency about who exactly runs them. If you’re ready for a VPN, we think IVPN is worth the price, even considering competitors with cheaper options. If you’re not ready to commit, you can try it out with a seven-day money-back guarantee. It’s easy and obvious to turn off automatic billing, too. 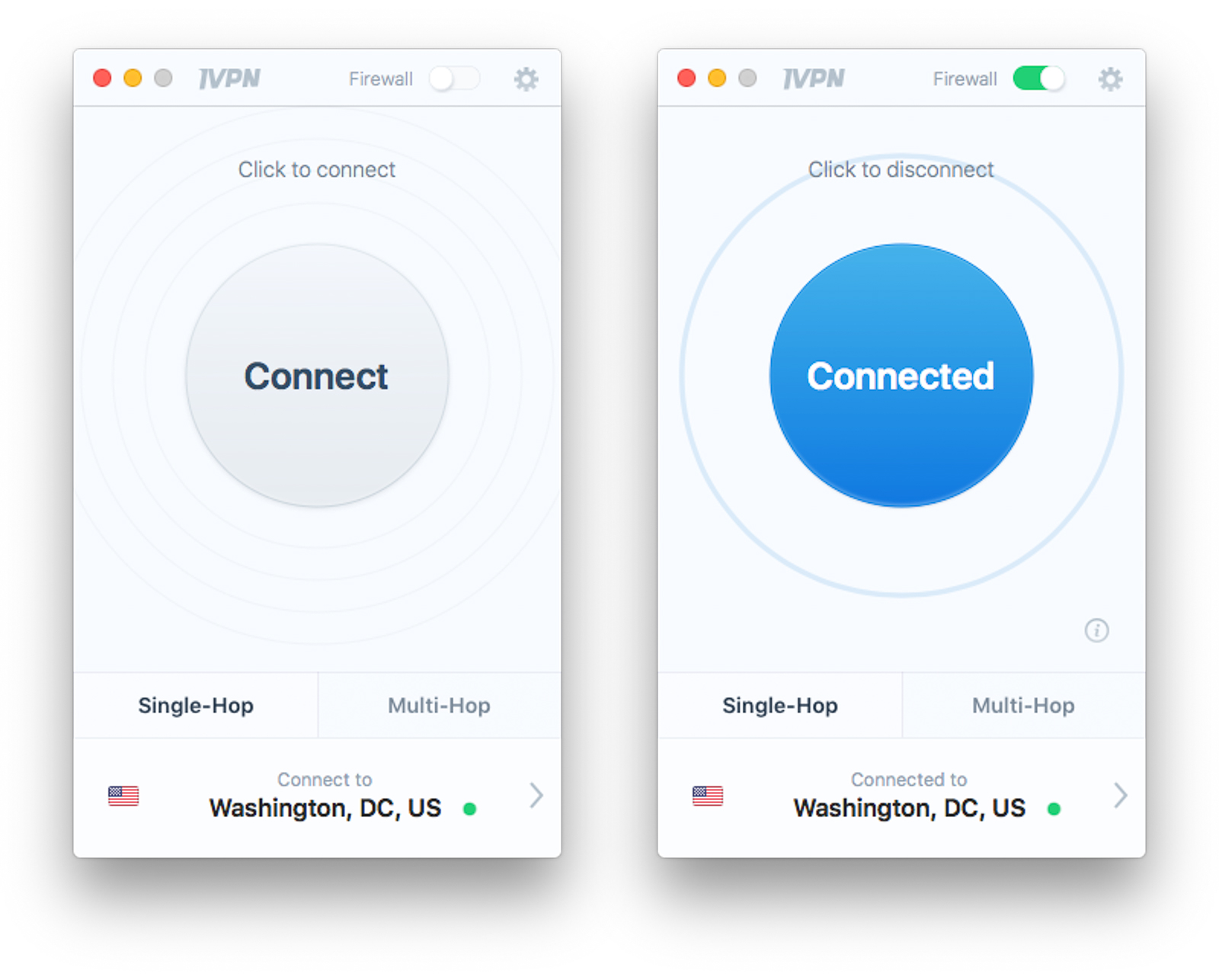 The IVPN desktop app’s main window is about as simple as it gets: You just click Connect. (Mac version shown here.)

Trusting a VPN is a hard choice, but IVPN’s transparency goes a long way toward proving that its customers’ privacy is a priority. Founder and CEO Nick Pestell answered all of our questions about the company’s internal security, and even described the tools the company uses to limit and track access to secure servers. IVPN goes further than the other leading candidates we considered by being transparent about who runs the service and who is responsible for your privacy.

IVPN also performed well in our speed tests. Though it wasn’t always the fastest in the 54 measurements we took on each service, it ranked near the top on many servers at different times of the week—especially compared with the most trustworthy services. Private Internet Access, one of the most visible, privacy-focused VPNs, had slower speeds when connecting to most servers and less reliable connections than IVPN. For US servers (which we expected to be the fastest locations because we tested from California), IVPN ranked behind only OVPN and TorGuard. We liked OVPN—especially its speed results—but we thought that company’s small team and small selection of servers and locations were too limiting for some people.

Our results were similar in other parts of the world, with IVPN ranking near the top regardless of the test, day, or time. The exception was in Asia, where its only location, in Hong Kong, didn’t perform as well as competitors in Japan, where we tested whenever possible.

When we tested other aspects of IVPN’s performance, it also satisfied our requirements. On the default settings, our real IP address didn’t leak out via DNS requests or IPv6 routing, let alone a standard IP address checker. The DNS-requests check indicated that the app was using the company’s internal DNS servers and that they were correctly configured. None of the 12 services we tested disclosed our true IP address (though some showed mismatched IPs). 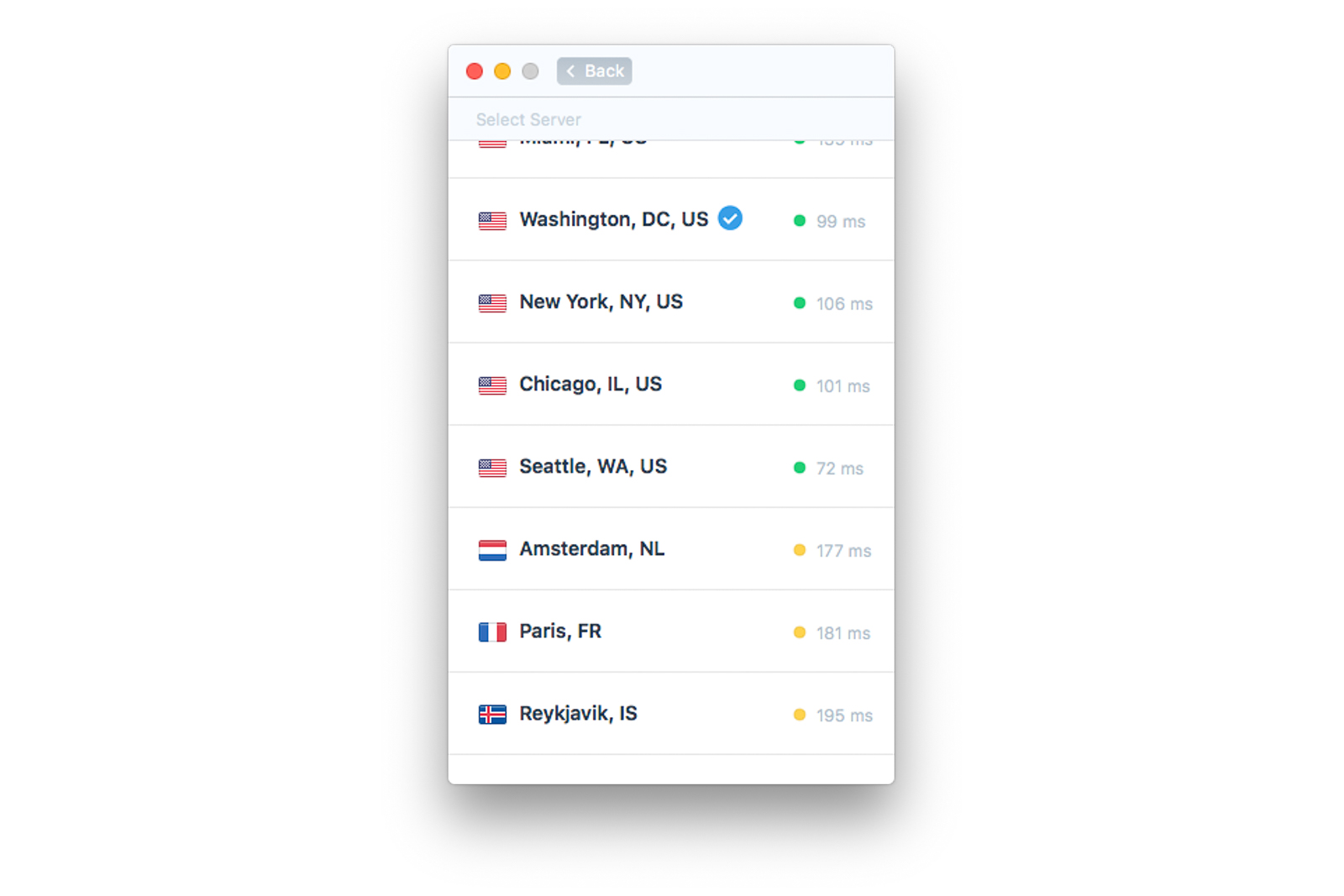 IVPN’s server-selection screen shows latency measurements for each location, color-coded in case you don’t know what that means. (Green is best, then yellow, then red.)

As we previously noted, we don’t recommend relying on our picks to get around geographic restrictions on copyrighted content. The practice is likely illegal, and it violates the terms of service of your ISP, VPN, and content provider. On top of that, it often doesn’t work—we couldn’t access Netflix over any of the services we tried, and of the four streams we loaded on BBC iPlayer, only two worked a few days later.

The IVPN app’s default settings are great for most people, who should be happy just smashing the Connect button and not fiddling with settings. On a desktop or an Android device, the company supports only the OpenVPN protocol we recommend and uses AES 256-bit encryption (what we consider the standard at this point). Our budget pick, TorGuard, defaults to the weaker (but also acceptable) AES 128-bit encryption unless you manually change it. 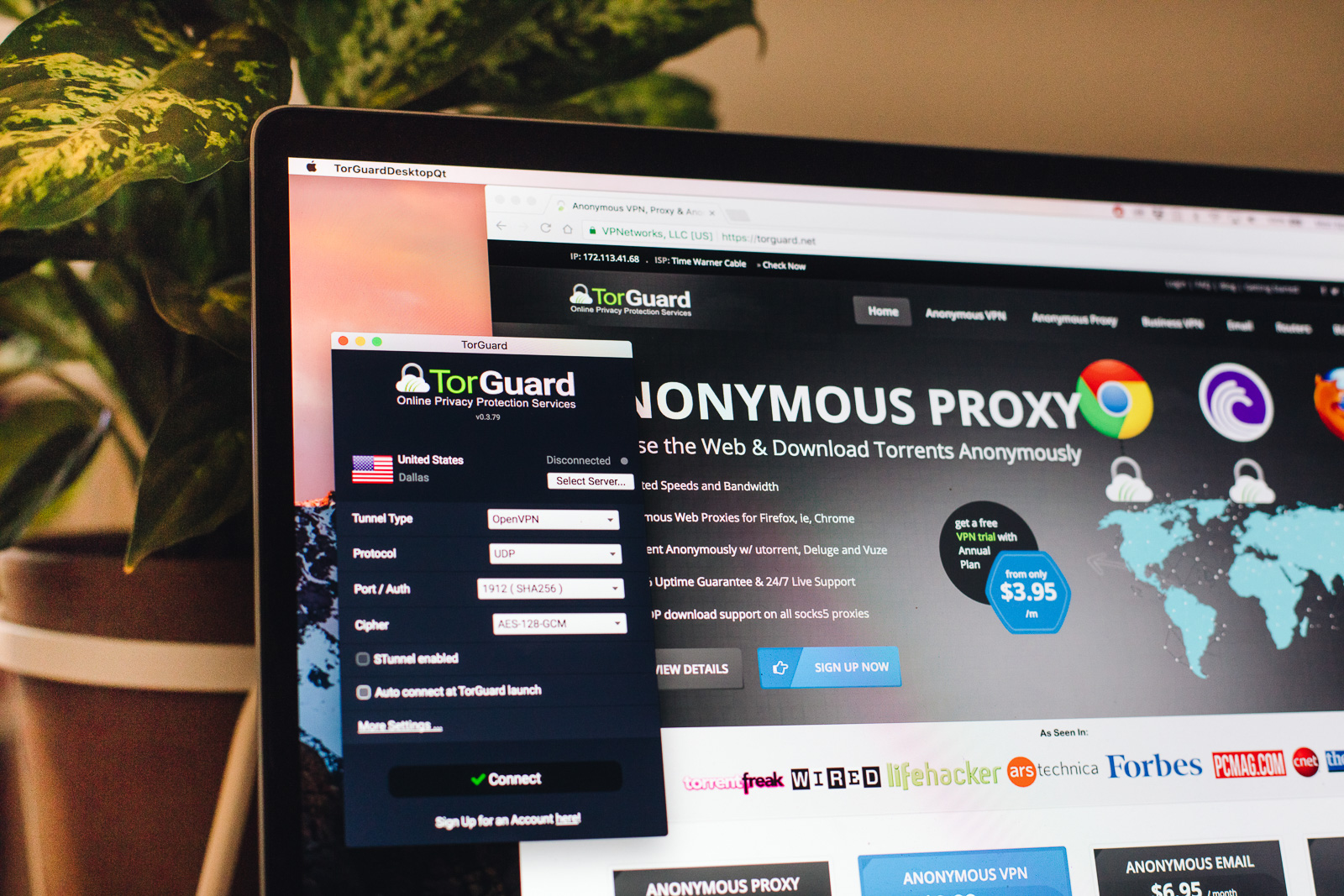 If you don’t mind doing a little extra tinkering in a more complicated app to save some money, we recommend TorGuard because it’s trustworthy, secure, and fast. TorGuard is well-regarded in trust and transparency; it was also the fastest service we tried despite being less expensive than much of the competition, and its server network spans more than 50 locations, more than twice as many as our top pick. But TorGuard’s apps aren’t as easy to use as IVPN’s: TorGuard includes settings and labels that allow extra flexibility but clutter the experience for anyone new to VPNs.

This guide may have been updated by Wirecutter. To see the current recommendation, please go here.